That's how, on Sunday afternoon, he discovered Chrono Trigger, an RPG created by the Final Fantasy team and released in 1995. It's now downloadable for 500 Wii points ($5).

After discovering Chrono Trigger, Jack researched it on YouTube. He watched several walk throughs. He decided he wanted it.

We had a long back and forth. He suggested that he could empty the dishwasher. (But there aren't any dishes in it.) He could take out the trash. (I did that this morning.) He could help with the laundry. (OK. We need to do laundry.) But he wanted the game now. Isn't that instant gratification? What if we made a contract? He didn't want to. I made one anyway.

I agree to pay for $10 worth of Wii points on the following conditions:Signed....
I agree to these conditions.
Signed....

Jack looked at the contract and threw a mild fit, which prompted me to leave the apartment to go check the mail. When I returned, he was practicing piano.

After 15 minutes of practicing, he pulled the laundry basket out of the closet. I coached him on how to sort, check all the pockets, gather the necessary items, and walk it all over to the laundry room. He inserted the coins, measured the soap, loaded the machines, and insisted we wait until the washers filled and the cycles began. When it was time to load the dryers, he cleaned the lint traps of all the dryers in the laundry room, loaded the clothes, put in the dryer sheets, inserted the coins, started the cycles.

Then, 48 minutes later, we went back to the laundry room and with my coaching he folded all of his own clothes. We loaded the basket and headed back to the apartment.

"Mommy, I'm not going to sign that contract yet," he said.

"Why not? You want the game tonight, don't you?"

"Yeah. But I'm not sure I can do all of those things."

"You don't sign it, you don't get the game tonight, right?"

This morning, right after waking, he asked me to show him how to scoop the catbox. I showed him. After washing his hands, he sat down and practiced piano for 15 minutes. When he was done, he said, "Do you think I can do those other things tomorrow?"

"What I think doesn't matter. Do you think you can do them?" I said.

He went and signed the contract. I bought him the Wii points. 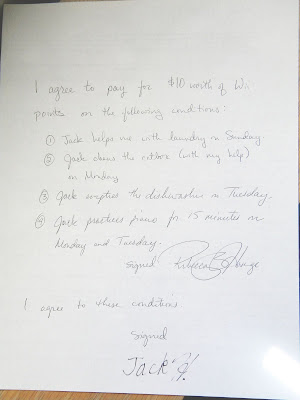