It's easy to be bitter 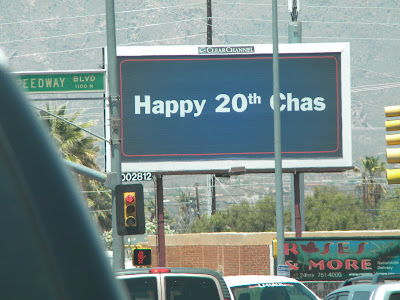 This month I lost my home to foreclosure. This month Chas celebrated his 20th birthday, and his family (I'm assuming) has seen fit to wish him well on several billboards around town.

Rudimentary research reveals that billboard advertising costs run anywhere from $700 to $3000 a month.

Even at the lower end of the billboard advertising cost spectrum, the price of three billboards would cover my rent, utilities, and gasoline for three months.

Today I took Jack to an end-of-the-year swim party at the home of a classmate. Newly remodeled, that home could have engulfed my apartment 5 times over. Everything looked high-end and the parents were the type of overachievers that scare me. I was talking with one of the dads, a guy I've had a few really interesting conversations with, who knows my situation. We were sort of gazing around, taking it all in, and I said, "It's easy to be bitter." Rob was quiet for a moment. Then he said, "You can't buy happiness. And you can't resent them for what they have."

He's right. He and his family struggle, too. He said he wouldn't trade his for theirs, and I agree. They wouldn't want mine anyway.