Festival en el Barrio, brought to you by Calexico and KXCI 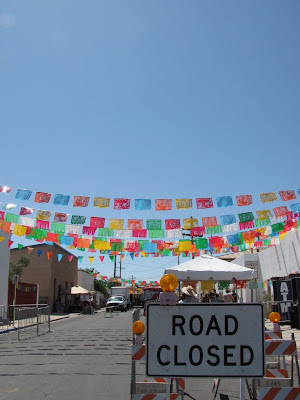 I drove downtown with no inkling of what to expect. I had a general idea of where El Festival en el Barrio would be held, but I didn't know who to talk to, where to go to set up the booth, or where to meet my partner Susan. Me, I've never done a craft show or art festival before. Susan: she's a veteran. We met up at the intersection of Cushing and Myer and manuevered the road block to unload. 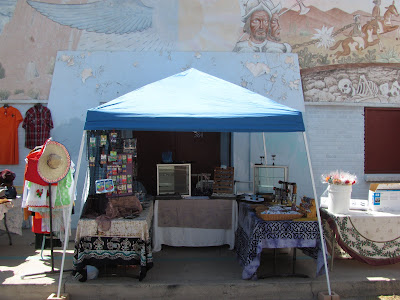 We unloaded, parked a million miles away, and set up the booth. It's my first time ever and Susan's first time working with me, but we managed OK. See? That's MAST to the left and the Shea Butter guy to the right. The other merchandise vendor sold reworked license plate collage and I didn't get the name.

This had to be the most poorly organized craft fair on the planet, but when we realized that the craft fair was just tacked on to a music festival we understood a little better why everything was so haphazard. At least Susan understood. I felt I was just along for the ride, me being a craft show virgin and all that. The organizer told us purchases would be made with tickets sold by KXCI for $1 each, good for food or merchandise. At the end of the day tickets would be tallied and vendors would be paid 80% of their earnings, with 20% benefiting the radio station. After we were all set up we found out that food and booze vendors would operate under the ticket structure but we'd be taking cash. Lucky Susan had her cash box and enough change to get us started.

We got started. The first person to come up to the booth looked at my earrings and bags and picked up a business card. She flipped it over, read my name, and asked, "Are you Miss Becky?" "I am," I said. "How do I know you?" She told me her name is Maryann; she and I have a mutual friend; we were at mutual friend's birthday party together in February; she's been saving Capri Sun pouches for me. Her husband was in the first band, Fourkiller Flats.

The second person to visit the booth was a woman wearing a pair of my earrings. Earrings I'd made and Susan sold for me at the Street Fair last fall. What a thrill. 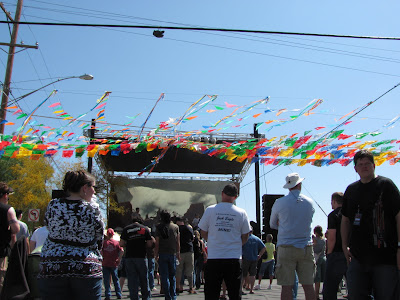 Here's the stage during Fourkiller Flats. They rocked. 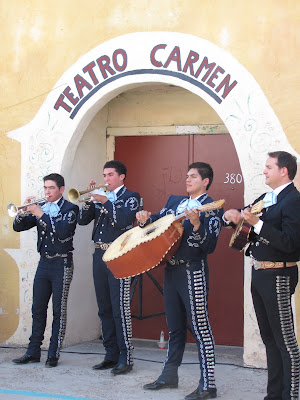 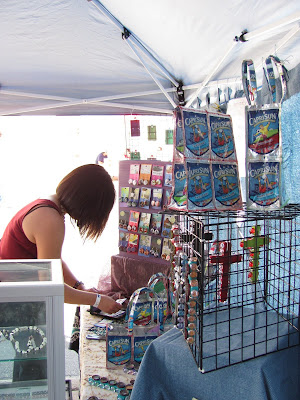 I could have hugged this young woman. She spent a long time looking through my business cards, which are simple collages featuring my business logo over a scrap clipped from a children's nature encyclopedia. She looked up and said, "Your cards are just like little gifts!" 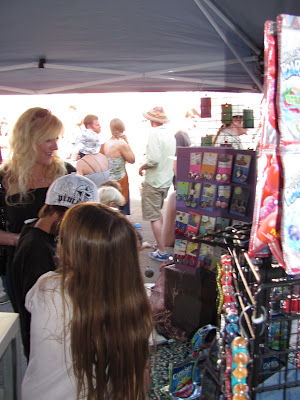 We had lots of lookers, and a fair number of buyers. I sold mostly earrings, which are priced at $5 a pair and mounted on custom collaged cards.

I was just tickled to find myself there. I've always liked live music but prefer it in small snippets. I don't like standing there listening to overamplified distortion for more than 20 minutes at a time. But when I have something else to do, like talk to potential customers or straighten merchandise, I found I could enjoy the music more. That's how I knew it was a great music festival with a half-assed craft fair tacked on: the sound system was excellent and the bands were just loud enough, with vocalists accorded balanced sound, so you could actually understand their words. 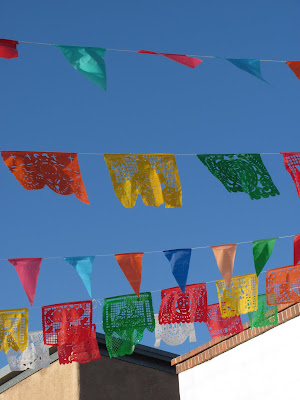 The organizers lined up top notch bands. After Fourkiller Flats, Tom Walbanks took the stage, followed by Crawdaddy-O and Sergio Mendoza. I wandered a bit, swaying with music and snapping countless shots of the plastic papel picado banners fluttering against the blue sky. 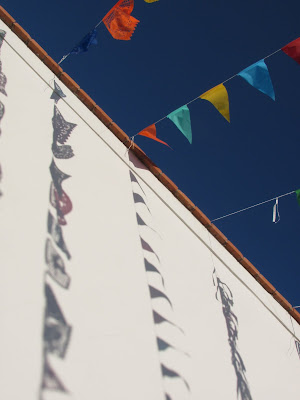 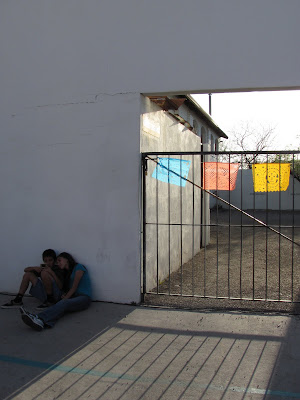 The shadows were just as fetching. 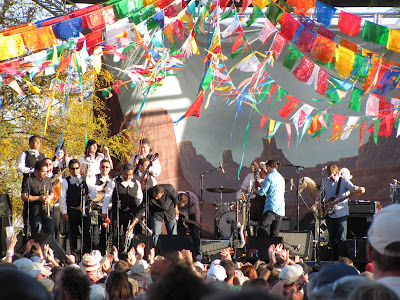 Sometime between 5:00 and 6:00, Calexico took the stage. As they played, I ditched my 20-minute snippet stigma. I could have listened to them for much longer than the hour and few that they played. 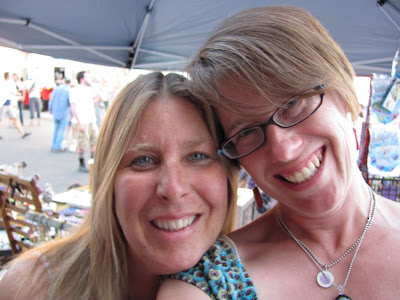 By the end of the day, Susan and I both went home with our pocketbooks a bit fuller than when we arrived, much richer in experience and in partnership. Our next show is the first weekend in May at the Tucson Folk Festival.

Congratulations on having a successfull show.
6:29 AM

sulu-design said…
It took me long enough to make it hear to read your run-down on the sale, but I'm here now! It sounds like a really wonderful day - good music, good friends, and some sales. What more can you ask for? I'm glad to hear it went so well (hearing about the poor organization at the beginning of the post had me worried).
9:02 PM

shy_smiley said…
Thanks, everyone! Tom: I got a new Canon point-and-shoot after my original Olympus died and was replaced by an inadequate Nikon Coolpix, which also died. I like the Canon very much but my dream is to someday own a digital SLR. Mona: It was. I think you would have enjoyed it, too. Sue: Thank you! I'm hoping for a similar experience at the Folk Festival in two weeks. I best get crackin'. I want to make some lower priced items, like magnets and pendants.
6:01 AM