wotd: erudite, brought to you by The Tucson Festival of Books

How I wish this event could span more than two days, and that I had all the time I needed to see everything I wished to see. A hearty thank-you to the developers and organizers of this well-run celebration of literacy. I spent the whole day there and felt electrified with positive energy the entire time. 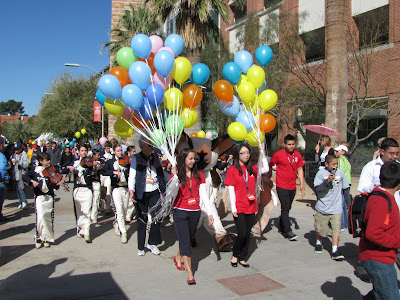 After marching with them to the UA Mall Tent, I settled in to listen to Lenore Skenazy, the world's worst mom, syndicated New York Daily News and NY Sun columnist, author of Free Range Kids: Giving Our Children the Freedom We Had without Going Nuts with Worry, and owner/operator of the blog by the same name. She developed this free-range philosophy after dealing with the aftereffects of allowing her then 9-yr-old son to ride the NY subway alone. I agree with her philosophy, and asked her after her talk if she often found herself preaching to the choir. She told me she'd recently talked to a group who disagreed with her entirely and how uncomfortable it had been. She said she liked to have at least a few choir members in her audience. 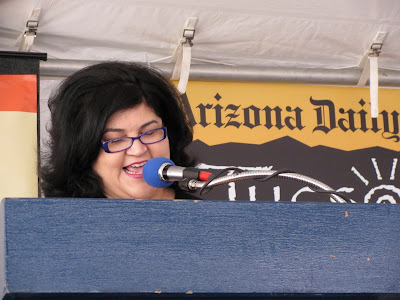 After I got my free McFrappe I headed to the Pima County Public Library's Nuestras Raices tent, where I purchased Kathy Cano-Murillo's first novel: Waking Up in the Land of Glitter. She read from it, as well as from two previous books, and ate up most of her time that way. There was no room for the advertised Q&A. 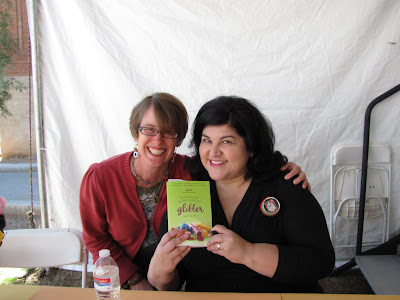 I jumped in line for the book signing, though, and asked someone to snap my pic with the Queen of Glitter herself, the Crafty Chica. She's as effervescent as her writing suggests she would be. A real honor, Kathy. Thank you! 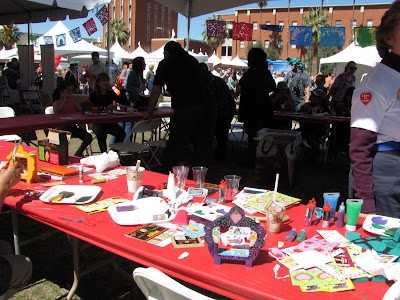 Michael's craft stores donated a boatload of Crafty Chica product for the project in the art tent. I sat between two children and we all painted and glued, snipped and glittered, till we'd each created our own personal shrine. Working for an intense hour on a single project usually doesn't happen for me. My brain was positively electrifried when I was finished. 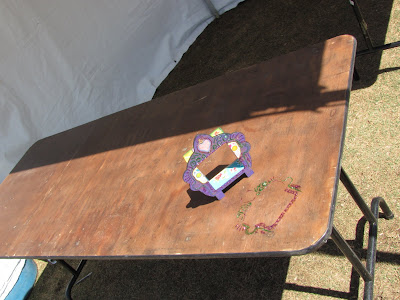 I left the tent and set my shrine down on a table while I organized my gear in my backpack and tote bag. When I went to pick it up I knocked it over, and left a glitter print on the table, where I hope it remains forever. 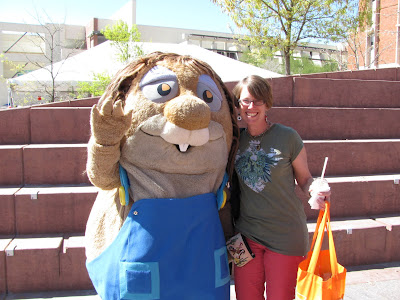 Had lunch with Dave and Jack, Mandy, Evan, and Brazey, then played a bit. Here I am with Little Critter, one of my favorite storybook characters to dramatize. Kids love him. I love him, too. 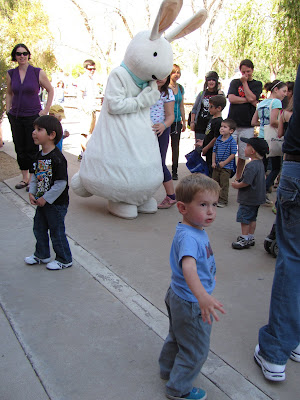 Brazey was a bit trepidatious about Pat the Bunny and finally went in for a high five. 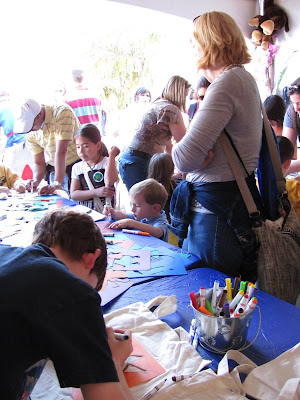 In the Bookman's tent we each decorated a tote bag: another frenzied artistic interlude that exhausted and exhilarated me simultaneously. 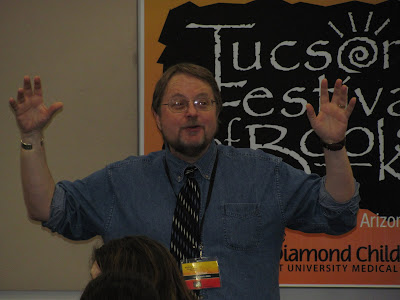 Earlier in the day I chose to hear the Crafty Chica read, rather then listen to Luis Alberto Urrea in an interview. At the end of the day, then, I went to his workshop: Southwest Inspiration. Again: blown away. Recently I read In Search of Snow, which was unlike anything I'd been reading lately and, in fact, unlike anything I've ever read, but so authentically flavored, so real, I had to listen to the man who wrote it. At his workshop I discover he's well-known, though I hadn't known of him. A Pulitzer Prize finalist, in fact. Extremely erudite, he'd take a participant's question and spin this lovely tale around it, answering the question fully so as to distill it to its very essence, without being academic or ostentatious. The hour evaporated. I could have stayed for two, three, or more.

I'm grateful for the one day I got to spend there, but one day just wasn't enough for The Festival.

Unknown said…
it was so nice to meet you, i LOVED your shrine - and then you left a glittery imprint behind!! thank you from the bottom of my heart for taking the time to come and hear my reading and make the project!!
8:41 PM

shy_smiley said…
whoo-hoo! Thanks for visiting my blog, Kathy. Don't get many visitors around these parts... but I haven't been a regular blogger, either. No time like the present!
6:31 AM