Thank you for the Christmas money. You wrote: "This is for your family. Do something enjoyable like going to a thrift store or out for hot dogs. Have a merry christmas." We did have a Merry Christmas, and I hope you did, too. I used some of the money to buy the new bedspread at IKEA, then used the rest of it on Tuesday.

On Tuesday we went to Doreen's house. Do you remember Doreen? She was one of my best friends in junior high. When we moved back to Tucson I reconnected with her. Her son, Xander, was born the same day, same year, as Jack. Her daughter Rumur was born two years later. 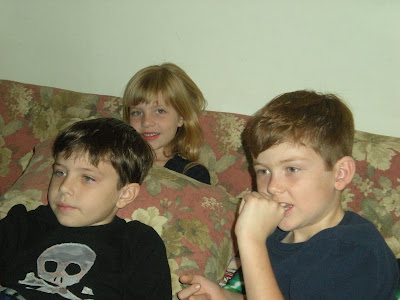 Here's Jack with Rumur and Xander at Doreen's house. Mandy, Evan, and Aaron met us there. We hung out for awhile and then we went to Thunder Canyon Brewery for lunch together. 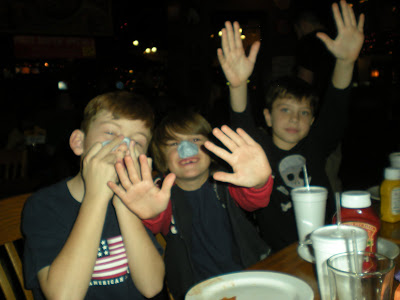 I ate a portobello mushroom sandwich with carmelized onions and feta cheese. Doreen had the southwest chicken salad and Mandy the soup and salad combo. The soup was tomato and mushroom bisque. The boys played with Legos and then with Aaron's playdough, which made their hands all sparkly. See? 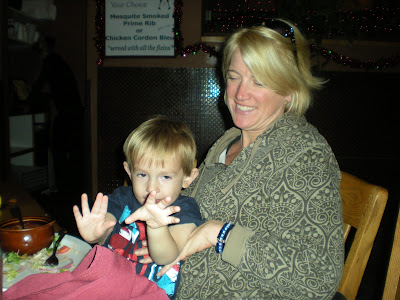 No, you can't see the sparkly hands, but you can see that they had a good time. Aaron, Jack, Rumur, and Evan had the dinosaur chicken nuggets with fries, Xander had 3 mini hamburgers with fries. 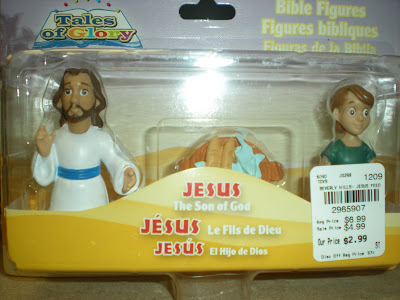 After lunch we wandered the mall, enjoying especially Claire's and Barnes and Noble. We were going to shop at a new Goodwill Doreen knew about, but it turned out to be just a Donation Center. So we went down the street to Tuesday Morning, where I saw these action figures that gave me a good laugh. Brazey had a big poop and proceeded to break down utterly after being denied ownership of some giant train set. Brazey cried and the boys cackled at the futility and intensity of his tantrum.

Still, we had a lot of fun. 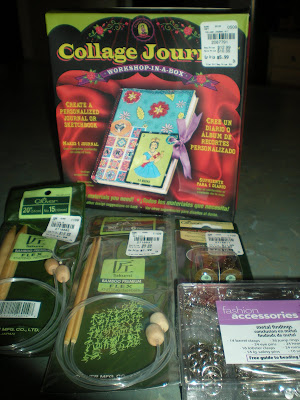 This is what I came home with: two sets of extremely expensive knitting needles at an extremely reduced price, some beautiful point protectors to keep me stitches on me needles, a box of findings for jewelry making, and a Crafty Chica Workshop in a Box to make myself yet another journal that I'll never fill, though journaling is my resolution for 2010.

We had a great time spending the day with Mandy and Doreen and all her kids. And we didn't leave Dave out. He'll enjoy that bedding from IKEA, too.