I had a first day, too. First day back in the classroom with younger three-year-olds, and I felt like it was the first day back to a job I enjoy. Though I started last school year as a lead teacher with high hopes in the older threes classroom, as the year progressed those hopes were dashed against the rocky shore of a difficult group of kids and a co-teacher whose philosophy differed greatly from my own. This year I'm back with the age group I enjoy and two teachers whose philosophies complement my own. 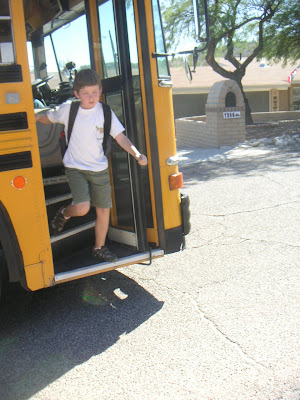 When I picked up Jack at the bus stop, we were both satisfied with a good first day. We're neither of us used to concentrating like that after the lazy days of summer, so here's to a lazy Monday evening. Cheers!

sulu-design said…
I'm glad to hear that you're back in a space that's good for you. Sounds like Jack is, too. Happy new school year to you both!
9:07 AM

It's easy to tell yourself that you'll write a daily blog entry using the word of the day from dictionary(dot)com as a prompt, and equally easy to temporize your daily entry by waffling over what to write about, or evading your obligation by procrastination. There. Bedtime.
Post a Comment
Read more
June 28, 2008
Jack doesn't have many "activities." I don't relish the thought of driving him to soccer, piano lessons, gymnastics, tae kwon do, KidzArt, swim team, T-ball, so on, and so forth. Not to say that I don't recognize the value of these activities, but I witness firsthand the toll a full schedule takes on little ones. On Monday nights Jack and his cousin participate in Young Champions of America Karate, which is more about learning discipline, respect, and self defense than it is about martial arts.