January 23, 2009
A parishioner at my church owns an Arabian horse stables that annually hosts something called The Black Stallion Literacy Program. I imagined a philanthropic and eccentric old lady reigning benevolently over her modest ranch, where a dozen underprivileged kids, each with his own horse and his own caring volunteer, made magic by learning to read. I pictured myself leaning against a haybale, the warm and wriggling body of a frustrated first grader beside me, the two of us on a journey to enlightenment there in the illumination of sunbeams swirling with dust motes.

The reality is much different.

Still, I'm glad I stepped out of my daily routine to volunteer my time to this program. I arrived on a rainy Thursday morning and signed in, then enjoyed half a donut and a cup of coffee from Bruegger's while I chatted up some other volunteers.

We sat for a brief orientation during which I learned that the program is far bigger than I realized, encompassing at least nine states. The program was conceived by Tim Farley and Mark Miller as a sort of legacy to Walter Farley, author of the Black Stallion books.

First-grade children in struggling schools are encouraged to read with an equine connection. The children are each given their own hard-bound copies of two easy-to-read Farley titles. Their teacher receives special training in presenting related activities. The children have a "first contact" experience with a horse brought to their school and introduced as the horse they meet in the book. After a month or so, the children have a "second contact" experience by visiting a stables on a morning field trip. At the stables each class rotates through four different stations where they meet a horse and learn about shoeing, feeding, grooming, and tack from volunteers.

I was assigned to present at a feeding station with another parishioner assigned as the horse handler. Our horse was a big red quarter horse named Tar Baby. Tar Baby looked just like the horse in the book, so we called him Big Red and let the kids believe he was the real deal. I realized that two big arenas each housed two separate presentation lines, totalling four complete rotations. Busses arrived at 10:00 and disgorged nearly 400 students who broke up into 4 different groups, each different group breaking into 4 smaller groups so there were between 20 to 30 students at each of the sixteen stations. They'd whirlwind through in an hour, then get back on the busses and leave before the next round of busses pulled up to disgorge another 400 first graders. 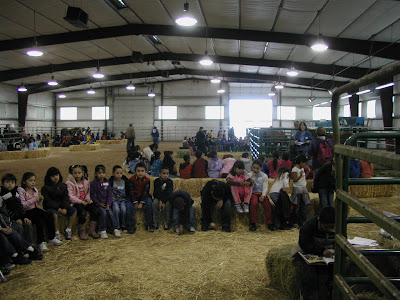 We got 10 minutes with each group. So I did my little Feeding spiel 8 times in a morning, saw the faces of nearly 200 first graders over the course of two hours, encouraged them singly to read a line or two to Big Red, who wasn't the least bit interested. 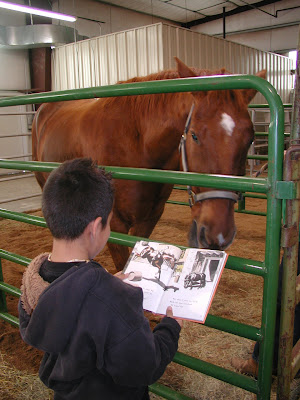 Most of the children were accomplished readers. Somtimes Big Red paid attention. 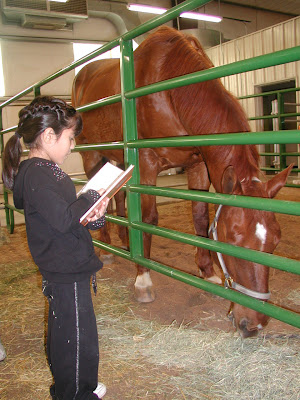 Mostly Big Red ate hay. And some of the children couldn't read at all. I observed several interesting coping strategies. Some children would start the word, then look to me for prompting. Some children read just the beginning sounds of the words. One child didn't read a single word on the page but made up his own fluent, imaginative story, complete with dialogue, just from the accompanying pictures.

Each day I left exhausted, wondering just how much of an impact this experience has on children. I realize now that it's just a small component of the whole program.

But I played my part, which is more than I'd done before.

auntie m said…
Maybe Big Red isn't paying attention because he has heard that story so many times before.
7:57 AM

Ana said…
Just want to say that, although I am sure this is a great program, I prefer your imagination to reality...
Assembly lines are efficient but are, somehow, not human.

Kudos to you for trying something new and cool! You inspire me to stretch!!
2:29 AM